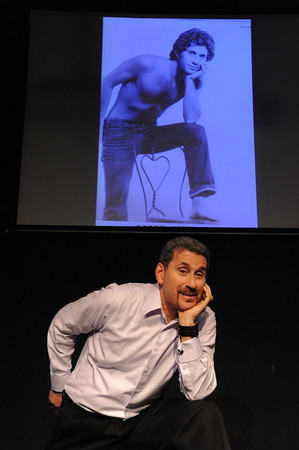 I hate getting sick. When I’m sick, much of what I like to do is out of the question and the rest is rendered severely less enjoyable. It was in this mood that I pulled myself out of two-and-a-half days in bed and schlepped myself to opening night of the world premiere of Blink and You Might Miss Me, an unheralded and little known one-man show written and performed by unheralded and little known Larry Blum.

I sat there in the front row with my arms crossed and body aching, trying to suppress coughing and daring this anonymous Hollywood nobody who had dragged me out of my deathbed to make me laugh. Immediately, I had a feeling I was in trouble and not just because the mac and cheese I had gobbled down just before leaving home was not sitting well in my stomach. Mr. Blum (rhymes with “thumb”) – who had worked in show business, both legitimate theater and television, his entire adult life – was visibly nervous. Although his resume is filled with brushes with fame – a bit part on a sitcom or soap opera, a dance number with Bea Arthur or Barry Manilow, escorting winners to the stage on various award shows, and small roles in a few Broadway productions, including a touring company of A Chorus Line – I think it’s safe to say he’s never before had to memorize this many lines or been the audience’s focus for this long. He raced through his opening lines as if afraid that, if he did not get them out in time, he would forget them.

But as time went on, he got more comfortable with the audience and vice versa. Despite being on death’s door, I couldn’t help but laugh during a number of his tales of life on the Hollywood fringe, from his daring encounter with Lucille Ball – which ironically places Blum in the role of madcap, star-struck Lucy Ricardo – to his amusing encounter with Ronald Reagan after Desert Storm to why he eventually became a member of Susan Lucci’s fan club. In between are many more first-hand anecdotes of what it is like to be “that guy, behind the – oh, you just missed him,” the guy who can lay claim to having appeared one-on-one with Ann-Margret (one of his “favorite hyphenates”) and engaged in clever onstage banter with Ryan Seacrest, all during the rehearsals, of course.

He is also candid, extremely candid, about his sexuality (hint: he loved musical theater from the time he was a child, danced on Broadway, and idolized Judy Garland) as well as his sexual conquests. Such frank talk might not play in Peoria, but the hip Hollywood crowd ate it up.

For every star in Hollywood, there are hundreds of Larry Blums, hoping for their one big break or at least for enough work to pay the rent, all the while adding to an audition reel of appearances that require a laser pointer to identify which one is him on the screen. But if anyone should start to feel sorry for these pathetic souls who never “made it,” Blum rejects such sentiment. After all, he’s spent his life in the business he adores and has, in the process, had a great time and amassed enough stories to keep a crowd entertained for well over an hour. How many of us can say that?

Blink and You Might Miss Me plays appropriately at The Asylum Lab, a tiny theater with the world’s most unimposing entrance at 1078 Lillian Way (one block west of Vine, just off Santa Monica Boulevard) in Hollywood.

Show times are Thursdays through Saturdays at 8 pm and Sundays at 3 pm.