Tsunami Relief and All That Jazz

A moonlight serenade turns into a visitation from the angel of death, times three.

It’s not often that a play creates a kind of intimacy that makes you feel like you are standing in the room with it, or rather hanging out like a “buddy” with it.  As it happens, Bridge, at Ruby Theatre at The Complex, showing it’s last several performances this week, forgoes the voyeurism of audience vs stage and invites you right into it’s heart and soul.

Bridge is not a quiet desperation by any means.  It is poetry invoked from the “mean streets” like the graffiti, the garbage, the grit and the city scape lit in the distance, that uniquely decorates it.  It’s hard. It’s loud. It’s passionate.  And it’s full of powerful joy, if you can choose to survive it.  So recites our leading character the jazz man, a saxophone playing and Mahler citing, accidental sage, keeping time under the stars atop a most awesome steel wonder.  Seats and stage, separated by a chain link fence, it is oh so cool and edgy.

Soft and initially full of delicious solitude like the night itself, Bridge, opened with a nostalgic nocturne to a house full of ex-pat Japanese patrons supporting outstanding cast member, Yuki Matsuzaki (The Last Samurai, Letters From Iwo Jima, Pink Panther, Pirates of the Caribbean) who gave a deeply provocative performance as the Japanese tsunami survivor, stricken with survivor guilt.  Resonant and painful, Mr. Matsuzaki proved that less is more than enough to bring tears to our eyes by engaging the audience with his internal intensity that registered well into the back rows and into the nucleus of compassion.  Clinging to cultural shame for being the son who leaves home, Mr. Matsuzaki’s character, also a musician, bears the heavy burden of being the only member of his family, and maybe his entire village who remains alive.

Los Angeles based playwright (journalist and novelist), Willard Manus found the inspiration for his protagonist in legendary jazz musician Sonny Rollins, who ceased performances for two years and would practice his saxophone playing on the Williamsburg Bridge in the middle of the night.  And indeed, not only is our leading man played so well, so generously and so heart-fully akin to Rollins, by William Stanford Davis (Bones, Harry’s Law) we never even get to know his real name.  He is truly the anonymous hero in the night.  Mr. Davis embodies what we as civilians think of as the uber-musician.  Cool, at ease, free, carrying around his history and with a clear look at life.  But this particular hero has a dark secret which, bit by bit, is revealed with each attempt at finding redemption for the people who pass through his life and his music on their way to suicide.

Enter actress, Josie Martineux, playing a substance abusing woman harboring an unbearable secret.  To note, Ms. Martineaux originated her role at the Write Act Theatre and remounts it quite successfully here.  She puts in a quite believable performance as a nervous, hyperactive, scratchy, crystal meth user living on a false sense of balance, which is what gets her through the day enough to keep a job, until her source dries up and she is left with nothing but aggression,  psychotic behavior and a one track mind to jump, to escape.  We do see a bit of her craft interfering here and there but never enough to keep us from being so moved by her revelation that we root for her survival.  And who cares what she did wrong or perceives as a wrong.  It’s not enough in our eyes to condemn her.

It could be any big city really, with the noisy hub of the city streets below.  Bridge has a subtle but recognizable city speak, cadence and courage.  Grounded in reality, firm in place, Bridge allows its characters and its audiences to stand their ground in order to float and hover in the wind like the sounds of the notes.  We are witness and participant in the same moment.

At some point in this play, it becomes almost comical to see our sax player get interrupted from his solitary pleasure, just as he is about to “get down.”  The whole idea of saving someone else is starting to become an eye-rolling habit.  However, not everyone can be saved.  At least, not in the way WE want to save them.   Every person has a great need to be loved and most of all be free from pain, as the transvestite, living with AIDS, brutally reveals.  Actor Donald Roman Lopez (former Ballet Hispanico and Metropolitan Opera Ballet Dancer also former member Spanish Repertory Theatre NY), enters definitely as one of the more ridiculous persons looking for the perfect spot to splat into the water below.  But it’s more than just betrayal, more than just lost love, more than being mugged on the way to the gay parade, having AIDS and having to live as he is, that tortures this man.  His life is full of unresolvable complexities. In the end, for him, brutality, empowers him with a “fuck it” – do it anyway.  Jumping, although absolutely terrifying for us to witness, is an absolute decisive moment with clarity for him.   Mr. Lopez’s performance slaps us awake from the delusion of “fun gay friends” straight to “human being” filled with a craving for connection. He is simply and sadly wonderful.

As part of the Bridge experience, the producer, director, cast and crew ask that you please consider donating to the Tsunami Relief Fund at the end of the evening.  Or please consider donating to the following charities online:  AIDS Healthcare Foundation: www.aidshealth.org; Los Angeles Mission:  www.losangelesmission.org; American Red Cross Japan Earthquake and Pacific Tsunami: www.redcross.org.  And many thanks.

Bridge is preformed Thursdays, Fridays and Saturdays and 8 pm and Sundays at 2 pm through December 18th. 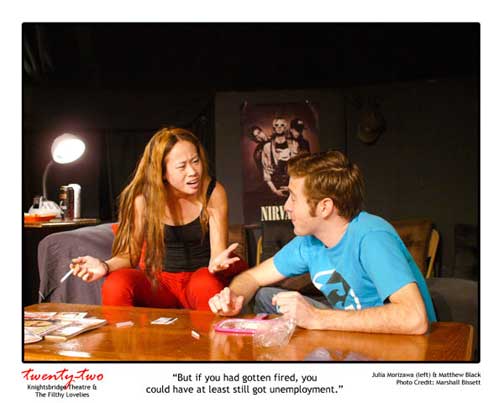