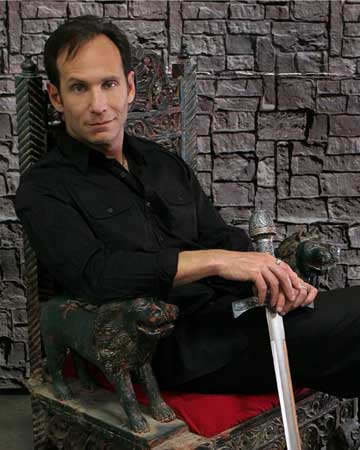 Editor’s Note: LA Theatre Review is proud to begin its 2011 Hollywood Fringe coverage with a tease of some of the shows that are previewing before the official opening of the actual festival next Thursday, June 16th. Here are the first three reviews. We will tease you with a couple more each day until opening, then will “hit the ground running” on Thursday.

Life in the Middle Ages at Asylum Theatre

“I’m gonna die. I’m gonna die. I’m gonna f***ing die.” If you’re over 30, get used to repeating this mantra. Steve Ochs did, and he kept repeating it until he finally found it funny. In doing so, the veteran stand-up comic created his 70-minute, one-man show (not counting his Narratrix, voiceover by Wendy Cutler) called “Life In The Middle Ages,” opening the 2011 L.A. Fringe Fest at the Asylum Theatre.

Spry and slender at 52, Ochs doesn’t appear to be in danger of anything worse than the inevitable AARP invitation in his mailbox. Somewhere along the line, though, a dawning realization of his mortality inspired him to use Elizabeth Kubler-Ross’ “5 stages of grieving” as a framework for dealing with the fact that… (See above).

Scratch that. Basically, it’s an excuse for Ochs to re-purpose some schtick around a mid-life crisis theme, but the device works. He does have some great lines (“50 is a great age to get a tattoo, because it’s cheaper than a Porsche and you can still look like a douchebag”), but others seem to have spent some time out on the road with him. Nonetheless, his years of stand-up experience serve him well as he turns in a brisk, funny, and ultimately uplifting show.

The Next Best Thing

“This is a love story” begins the recounting of a soul mate and the discovery of a true love so powerful that even given pain, insecurity, complications, and the good possibility that nothing lasts forever, love is all or nothing — and would you still choose it, if you knew the odds.

Antonio Sacre claims not to be a writer but rather a storyteller. And indeed the Irish-American/Cuban, reminiscent of the bards of old, has got more than a “touch of the poet” in him. In, THE NEXT BEST THING, Sacre blends contemporary storytelling, ancient myth and modern verse into a moving, honest and heartfelt performance about one man’s survival of falling in love, blessedly, without fan-fare, slap-stick, or melodramatic tear-jerking. More than willing to bare his heart to audiences, he shares his most painful and wonderful moments in an exquisite “black box” performance – simple, humorous and subtle – through the metaphor of the Russian fairy-tale, The Firebird and Princess Vasilisa, comparing himself to the boy, who, time and again walks into his fears, his destiny and transformation.

Written and performed by Antonio Sacre. Directed by Paul Stein in collaboration with Jim Lasko, Artistic Director of Redmoon, Chicago.

CODA: Debut Album at the Complex Theatres – the Flight Stage

CODA: Debut Album attempts to answer the old age question of what is love through a collection of short plays. The different expressions of love ranged from the anxiety of a first date to the loss of a lover to addiction and co-dependency. Playwright Cynthia Glucksman said in the program that this collection of plays is expressed as a musical album. Each play featured some element of music whether it was live music or references to musicians and songs, a fitting device for plays about love. But the play as a whole was slightly out of tune. The pacing was a bit off and the scene changes were clunky.

The most intriguing piece was “Down the Niagara Falls” where two young lovers’ first date takes a rather tragic fall. The characters reflect on a lifetime of the emotions, regrets and experiences of a relationship in mere seconds. Actor Ally Zee was particularly interesting to watch as she embodied the arrogance of one character she played and then the youthfulness and innocence of a different character.