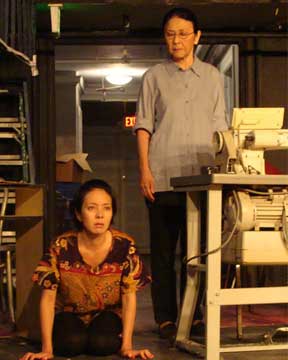 1995. Toy Story is number one at the box office, the Dow hits a record 5000 and in the little town of El Monte, 20 miles southeast of the Hollywood sign, on August 2, a multi-agency task force raided a seven-unit apartment complex and freed 72 undocumented Thai immigrant workers, most of them women, who had been held in virtual slavery. Trapped behind razor wire fences and padlocked doors and forced to sew garments 17 hours a day, they were paid less than 10% of minimum wage and had to buy essentials with the rest – spending up to $6 for a bar of soap. 72 slaves held hostage, some for up to seven years, right in our backyard, right on the way to Vegas.

A complicated web of cultural, psychological and industrial forces, Henry Ong’s Fabric weaves an accurate historical account while telling the story of the sweatshop victims.

Riding the elevator up with us to the 3rd floor Black Box where the Company of Angels has been for about two years, the custodian tells us that the Alexandria Hotel was built in 1910. It really has that old Los Angeles feel that transports you back in time– so much is going on downtown these days and it’s great to feel a part of it. The lobby is peppered with memorabilia from 1995 – fabric samples and some pictures from the raid and at the outset of the play different characters appear and tell us, from their own legal, ethical and moral perspectives, what’s in store.

Aside from a parallel narration of the Lawyer addressing the audience as the jury, interjecting the crucial facts along the way, the first half lays down the journey, from Thailand to El Monte, of the sweatshop victims. How they are deceived into coming to America , the details of the “factory” and the psychological manipulation that lead the girls to be indentured behind their sewing machines. The leader of the Thai-Chinese gang family who operated the converted apartment space and enlisted recruiters, Auntie Suni (played with strength by Dian Kobayashi) – who “only picks the best ones” – withholds their mail, controls their diet and sleep and threatens their families back home with the Thai Mafia – intimidation and scare tactics that take a toll on the workers to blur the fine line between fulfilling a contract and being her slave.

The second half of the play, more clearly structured (in that familiar police procedural way), depicts the circumstances that lead to the raid. One of the girls who has escaped out the window by removing the air-conditioner, and is presumably dead or raped, comes back to blow the whistle. Ironically, it’s because of her escape that the razor wire went up and the girls weren’t allowed outside of the complex. On the day of the raid, law enforcement officers led by the California Department of Industrial Relations and the INS arrested eight operators including Auntie Suni. The inter-agency politics and sensitive handling of information on a rescue that almost never happened unfolds into a full on door battering, interpreter attended assault and the ensuing courtroom drama. In the light of court, a familiar and established atmosphere, we see more clearly the distorted sense of reality in which the victims lived.

A strong ensemble effort, with some stellar performances in the way of multiple roles. Feodor Chin’s military clad Thai politician with distinct and despicable mannerisms and a depth of emotion from Jolene Sarah Kwang-Ai Kim (Jaidee), Jully Lee(Lampha) and Jennifer Chang (Rotchana). Within Mr. Ong’s story are moral issues of how we treat people – each other, the psychological forces of greed across cultural boundaries, the influx of illegal immigrants – a battle in our own political arena and how their personal stories may be overlooked for the sake of policy. All things we should perhaps reconsider in an emerging global market. Plays that deliver an accurate history while allowing the full depth of the human experience can also uniquely transport ideas by encouraging us not to forget (see Shakespeare and his monarchs). Fabric has all those elements but whether in Mr. Ong’s script or director Marlene Forte’s staging, the pace at times relied on weighty exposition that was delivered at the expense of the narrative thread, cooling the dramatic tension. The sometimes obscure lighting/set changes and a rather muted sound design – in conflict with the backbeat of the hip hop dance club going on 3 floors below – didn’t help.

However, at the curtain call, the cast gave special notice and a heartfelt thanks to the actual Rotchana (one of the victims) who had attended the show and was in the audience with her family. It was touching to see her in real life, so grateful and moved by the play. Members of the audience shook her hand and seemed warmed to know that her life had come to some good. I felt generous thanks for the collaborative efforts that brought her story to the stage. My friend cried. Ms. Forte’s ideas and the script itself lead the cast- only in their second week – in that direction.

The Company of Angels is located inside the Black Box at the Alexandria Hotel, 501 S. Spring St., Los Angeles. At Spring and Fifth, downtown. 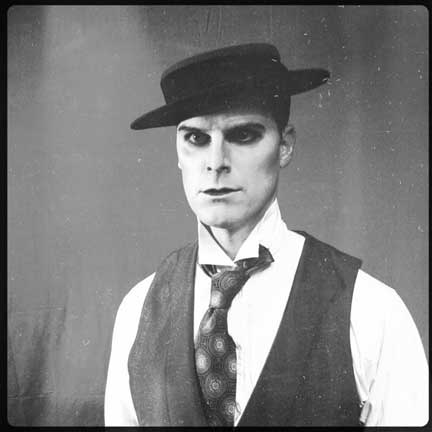